Maura Forrest/Yukon News file The Yukon government and Kluane First Nation have begun the process of building a new school in Burwash Landing.

“That element of our community is missing.”

The Yukon government and Kluane First Nation have begun the process of building a new school in Burwash Landing.

According to Kluane First Nation Chief Bob Dickson, the First Nation has been asking for a school in their community — rather than the existing facility in Destruction Bay — for over 100 years.

“This has been a long-standing issue that we’ve been dealing with here in Kluane First Nation,” Dickson said.

The current school, located in Destruction Bay, first opened in 1961. Kluane Lake School currently offers kindergarten to Grade 7 classes, including lessons in Southern Tutchone, but is located 17 kilometres away.

“In the past, all of the government services have been situated in Destruction Bay, which is 15 kilometres from Burwash, and includes a school,” Dickson said, adding that students must be bussed to the neighbouring community daily.

“One thing that we’ve noticed over the years is, in the last little while, a lot of our elders are saying, ‘Where are the little kids in Burwash? Why are there no children running around during the day?” he said. “That element of our community is missing.”

Dickson said intergenerational learning — particularly involving parents and elders in school programming — is crucial to Southern Tutchone culture. Right now, it’s impossible because the school is located outside the community.

“We want change. We wanted to involve our elders and parents in the school projects,” he said.

The government put out a request for proposals which closes on Feb. 25. Based on current timelines, the school would be expected to be built over the next three years. Construction would begin in the spring of 2022 and be completed in time for September of 2023.

Tender documents suggest the school would have three main classrooms in addition to more specialized learning spaces. The potential plans for the building also include a learning circle to welcome elders, a multi-purpose gymnasium space that would allow for dance and indoor play, a kitchen space, language resource room, workshop and space to allow science labs.

The documents also highlight different ways that Southern Tutchone language and culture could be incorporated into the design of the new building.

Site surveys began in November. The proposed site is located at the southeastern end of town past the intersection of Southwick and Sedata streets, close to community facilities on the shore of Kluane Lake.

The tender documents estimate the cost of the new school between $6.8 million and $7.2 million. The new school could accommodate a maximum of 60 students, with the ability to expand to accommodate 100 students.

Current enrollment is around 13 students but projected to increase.

While the government says Kluane Lake School does have the capacity to teach up to Grade 12 depending on enrollment, many families relocate when their kids reach high school age rather than learning by correspondence.

As a result, families have moved away to Haines Junction or Whitehorse in order to educate their children.

“Every couple of years we’ve had upwards of two or three families that have to move. Once they move on to our community, it’s hard to bring them back because they usually get established after three or four years,” said Dickson. “We want to keep our people here.”

The Yukon government signed a Memorandum of Understanding agreeing to build the new school in June 2020.

“We are very proud to honour this longstanding request of Kluane First Nation and to be working in partnership to build a new school in Burwash Landing that will allow Kluane First Nation Citizens to learn and thrive in their community,” said Education Minitser Tracy-Anne McPhee in a statement.

“This is another positive step toward reconciliation and working together with Yukon First Nations to build vibrant, healthy communities in Yukon,” she said.

There are no notices 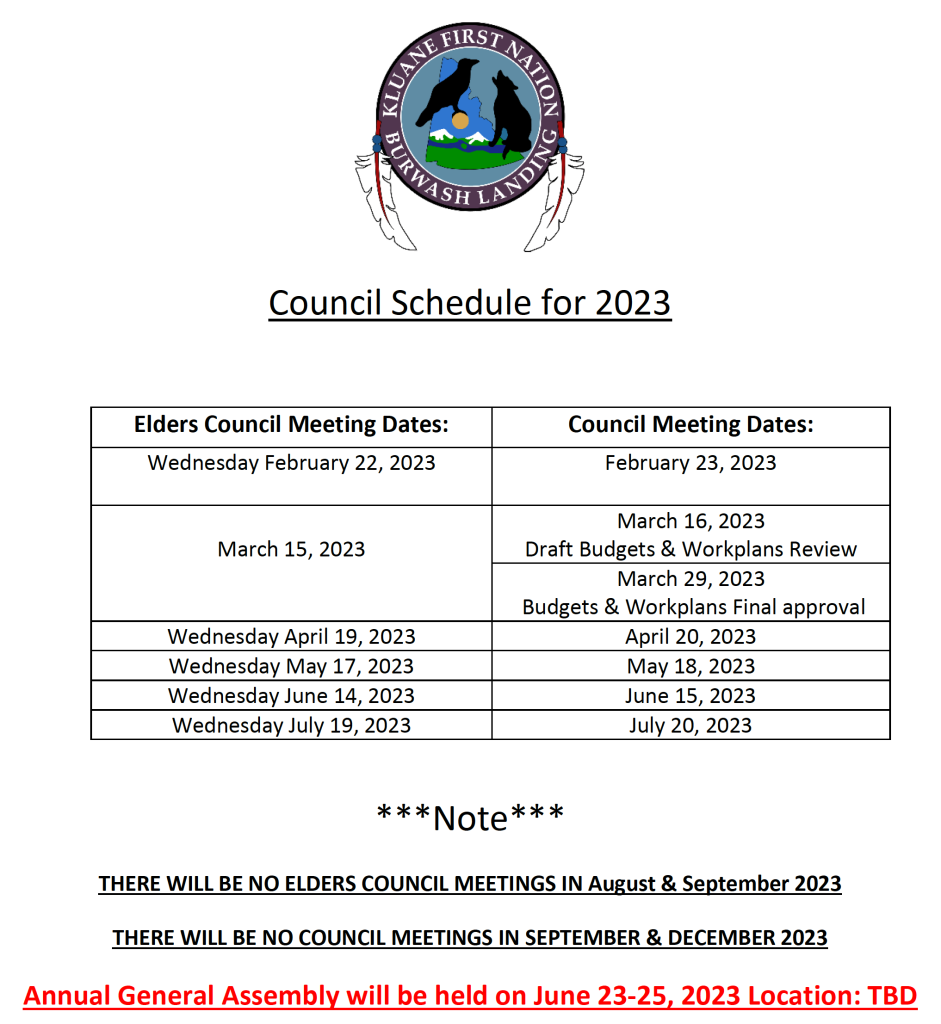