In this by-election, ELECTRONIC VOTING (E-VOTING) AND MAIL-IN BALLOT will be used. An e-vote or mail-in ballot will be sent to every eligible Citizen who DOES NOT RESIDE in KFN’s TRADITIONAL TERRITORY.  To cast your vote electronically please ensure Kluane First Nation has your current EMAIL address. If you live in KFN’s Traditional Territory, you may obtain an e-vote or mail-in ballot if you will be unable to vote at the Advance Poll or on Election Day.

Nomination Forms & Information for Criminal Record Checks can be picked up at the following location:

Nomination Forms and Criminal RecordChecks must be submitted to Reception or Nichole Williams at the Kluane FirstNation Office by 4:30 p.m. on December 20, 2018 due to offices being closed on December 21t.

E-voting, Advance poll and Election poll will be held as set out below:

The Kluane First Nation Voters List will be posted at:

You may call the Kluane First Nation Office at the numbers listed above to verify your name is on the list.

You must submit applications to amend the Voters List in writing to the Election Committee ℅ Kluane First Nation before 5:00 p.m. on January 11, 2019.

**warning: names will not be added to orremoved from the voters list after this date 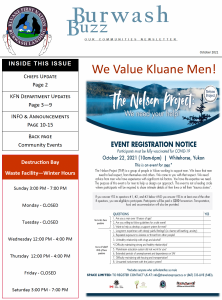